Mobilization could replace chemotherapy during treatment with gene-edited stem cells

Hematopoietic stem/progenitor cell gene therapy (HSPC-GT) has emerged as a promising treatment strategy for genetic diseases. However, its utility is limited by the need to use chemotherapy for bone marrow depletion before the engineered cells are reinfused. Not only does chemotherapy have multiple adverse effects, but it can also prevent cell engraftment by damaging the bone marrow stroma. To eliminate the need for chemotherapy during HSPC-GT, researchers at the San Raffaele Telethon Institute for Gene Therapy in Italy used HSPC mobilizers for bone marrow depletion in mice prior to administering HSPCs. Their data, published in Cell, showed this approach to provide therapeutically relevant levels of infused cells without raising serious toxicity concerns. In addition, transiently overexpressing engraftment enhancers ex vivo gave the infused cells a migration advantage over their mobilized resident counterparts, boosting occupation of depleted bone marrow niches. 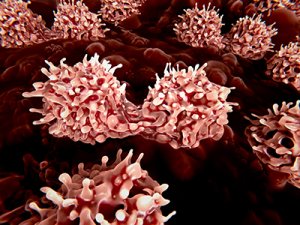 Mobilization involves disrupting interactions between HSPCs and the bone marrow stroma to cause HSPC egress into the bloodstream. This allows harvesting of HSPCs for engineering and can also be used for bone marrow depletion. By administering a combination of mobilizing agents to mice and analyzing blood samples by flow cytometry, Omer-Javed et al. showed levels of white blood cells, progenitors, and the HSC-enriched fraction to be dramatically increased compared to an untreated control group. These levels were sufficient to allow allogeneic engraftment of HSPCs, with donor chimerism reaching a median of 30% and remaining stable for up to 24 weeks.

Chimerism can be increased through transient overexpression of CXCR4

Studies have shown ex vivo gene editing to decrease engraftment efficiency, which could limit the therapeutic use of HSPC-GT. This observation was corroborated by performing site-specific integration of a GFP-expressing cassette into a lentiviral vector and transfecting HSCs, which exhibited decreased CXCR4 expression compared to an unedited control. These effects could be counteracted by co-electroporating cells with CXCR4 mRNA and gene editing machinery before infusion, with proof of principle experiments suggesting that overexpression of KIT, ITGA4, and CD47 mRNA might also provide an in vivo engraftment advantage.